This week, members of IPT Brazil have started an educational project in the Federal University of ABC (UFABC), Santo Andé, São Paulo. About 30 students made a visit to the university’s campi, where they could make excursions to get to know the classrooms, auditoriums and library.

One of these excursions ended in an auditorium where the IPT Brazil representatives prepared some Physics experiments about light diffraction, influence of air pressure in day-a-day life, hot-to-cold diffusion in fluids and surface tension.

The speech took about 30 minutes where the career of a scientist was brought into discussion considering answers to the questions ‘What do scientists do?’ , ‘Why are they important?’ and ‘What is the influence of a scientist’s work to my everyday life?’. Most importantly, the experiments were made considering these kinds of doubt and one in special that everyone has already had for once in their lives: ‘What will I use Physics for after I study it?’.

Considering that the IPT students Henrique Ferreira, Matheus Pessôa, Pedro Rossini and Ricardo Gitti have at least one possible answer to that, the chat and experiments were able to show by themselves why is Physics important and fun in many ways. The diffraction experiment showing the principles of geometric optics was able to bring all students from their seats to see it more closely: great chance they had never seen something like it before in their lives.

What can be considered an ordinary experimental setup for the IPT students has the potential to change a High School student’s mind to make them interested in studying Physics, and this is what IPT in Schools is all about.

The speech ended with a talk about the aurora borealis experiment developed for the IPT 2017 edition. IPT students now prepare for their next presentations that will happen in the last week of June.

Some pictures of this week’s event: 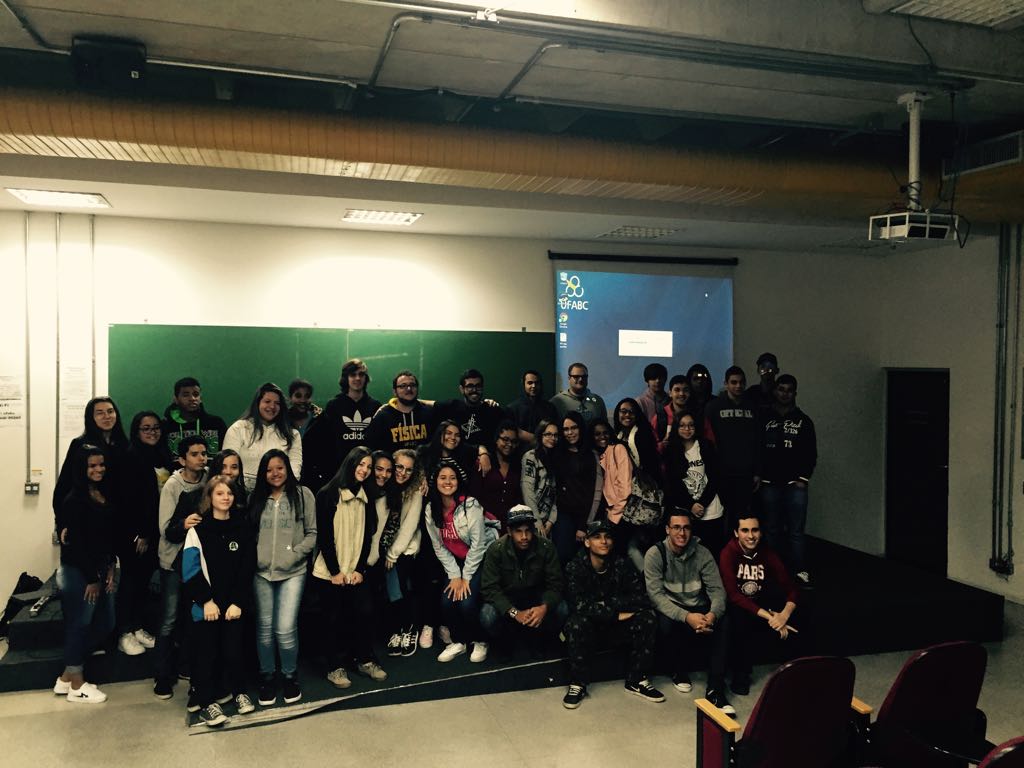 The project “IPT in Schools” was born considering the unattractive approach to Physics that High School students receive, which can be harmful for the country’s development; many great scientists can be lost in both private and public schools just by not giving the right motivation and showing the real-world work of a scientist.

Having the opportunity to develop many skills both in laboratory and speech, the IPT Brazil students chose to act upon this problem by making speeches about the scientist’s work, importance and about the importance of Physics to past and today’s world.

IPT in Schools is developed with a partnership between IPT Brazil and the Communication&Press Office of the Federal University of ABC.